It happened, I am officially thirty!

I am a bit late writing this, as in actual fact, as I type, I am thirty and a half, aka in school terms, much older and wiser than when I was thirty, and can pass my wisdom down to the mere thirty year olds out there, but not to the thirty one year olds, you guys top trump my aged wisdom.

You will be glad to know that I saw my thirtieth birthday in the only way I know how to, my nearest and dearest, way too many adult Pepsi Colas, a beautifully handcrafted offensive birthday cake, and the most perfect ‘U OK Hun?’ t-shirt known to man kind. Thanks Topshop. I am forever yours. 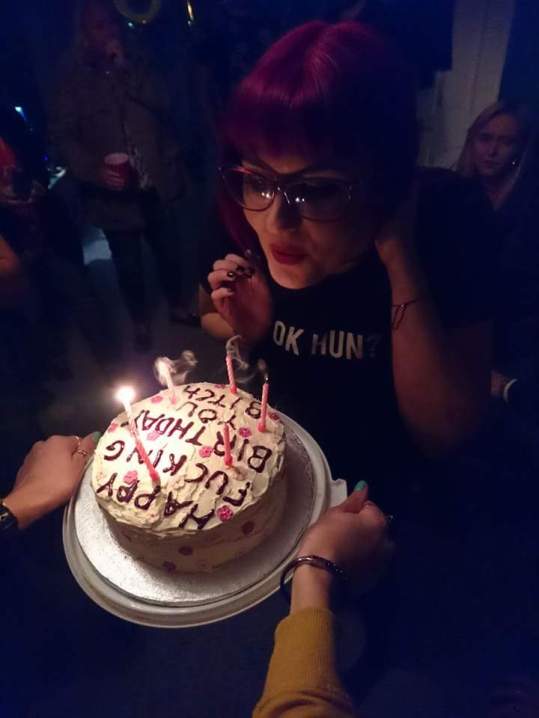 (Yes, that is a dinosaur balloon in the background, I also had a dinosaur cake alongside the potty mouth cake, because to repeat…I am an adult.)

I am an adult who does not have children.

Yes I am fully aware that being thirty is still young and there is lots of time in this life of ours to have children, give them ridiculous names, sit back, and revel in our creations. After naming a dog Bastian, you really can’t then go on and name your children anything casual.

Now my point here is, that I’m fine with not yet being pregnant or having babies, my husband is cool with it, so why are so many people not okay with it?

This started way back when we got married, we had barely recovered from the wedding hangover when it began.

”Soooooooo…..when are the babies coming?’

The sentence that makes my hackles stand on end. It started as a laugh it off question, very similar to the response I gave, the day after getting engaged, following the six thousandth person who had asked if we had set a date yet.

It is not something that is a big secret, we do want children, and fingers crossed one day they will arrive. Now, that might be the answer that I should just straight up give out, it is just delightful, friendly and hopeful. But everyone knows that is not how I work. No I like to make a situation awkward.

The decision to have children is a very individual choice. Some people from a young age know they want children and for some people it is a much deeper conversation that you have to have with yourself and your partner, and changes as your lives evolve and grow.

The decision not to have children is just as okay and valid as choosing to have children. Yet, I know if anybody answered the dreaded baby question with a very decided, ‘I don’t want children,’ it would be hit with, number one, a look of shock and confusion. A lady doesn’t crave a baby, what fresh hell is this?! Number two, a long list of reasons why that person will change their mind one day. They just haven’t met the right person yet and as soon as they do, that baby fever will kick in and will start popping them out one after another, and they better do it soon, because that good old body clock is ticking and you don’t want to miss the opportunity and regret it, as well, I mean, who is going to look after you when you are old?!

Move on guys, we will be living as robots by then, (or at least as the big lazy guys in Wall-E on a space ship being looked after), we won’t need our offspring clearing up after us.

I will never forget watching an interview with Nicole Scherzinger, just after her and the twatbag Lewis Hamilton had broken up after a seven year long relationship, and feeling so uncomfortable seeing her pretty much be told that she had wasted the last seven years of her life, because men can have babies forever but a womans time is limited. To make the situation even more awkward, Wendy Williams pointed to her womb and lady area saying the ‘good days down there are gone.’

Now I know Scherzinger lives in the celebrity world, and should expect some level of personal interest from the public, but I mean, she was there promoting a new TV show she was on, and suddenly the fate of her womb was being discussed.

Take Jennifer Aniston as another prime example of this. She recently was interviewed, and the fact that she even had to say this makes my little heart quiver.

“My marital status has been shamed; my divorce status was shamed; my lack of a mate had been shamed; my nipples have been shamed. Why are we only looking at women through this particular lens of picking us apart? Why are we listening to it? I have worked too hard in this life and this career to be whittled down to a sad, childless human.”

We don’t know these people, we don’t know their situation, as far as we know she might hate being married and get a kick out of divorce. She might have always tried for a baby and it not happened, she might also love dogs more than kids. Hell she could even end up back with Brad Pitt and becoming step mum to the Jolie-Pitt gang of six. But she shouldn’t have to justify her feelings to anybody, which brings me onto my final baby making/non baby making point.

It is generally people that you know less that ask the super personal ‘so when are the babies coming question?’. Which means that they are not expecting anything more than a ‘soon’, as an answer. Which is fine, soon is a solid no nonsense answer to that question that generally ends the conversation.

However, please also be open to the fact that you could be asking this question to somebody who is having trouble to conceive, somebody that doesn’t want children and is fed up with the questions, or somebody that may have miscarried and that it is not public knowledge.

(Don’t even get me started on the whole keeping a pregnancy secret until the twelve week mark, you know, just in case you have a miscarriage, and then because the world was unaware you were preggers in the first place, you just carry on and try again. Not cool the world. Not cool.)

Finally…finally, if somebody puts on some cake weight, around the time YOU were expecting them to be with child, do not keep waiting for the pregnancy announcement. It is just excess cake. If somebody goes to the toilet a couple more times than usual when you see them, they just need another wee. They are most definitely not pregnant. (They can also hear the whispers through a toilet door, just wood guys. Not sound proof.) The constant guessing game throws in extra pressure and expectation, which is just not okay.

Finally…finally…finally. Talk about it in a healthy way. If the conversation is started, expect some potentially tough chats, listen and react, and not just in the ‘oh I’m sure it’s going to happen one day,’ or ‘what will be will be way.’ You started the conversation, don’t brush it off, support and talk.

I never wanted to be a princess. Except for Ariel. She's OK. View all posts by Sarah Barnes

This is a text widget, which allows you to add text or HTML to your sidebar. You can use them to display text, links, images, HTML, or a combination of these. Edit them in the Widget section of the Customizer.
Loading Comments...
%d bloggers like this: